Debi Elliot went out on her family property on October 2nd with her crossbow to go hunting. Elliot had just finished watching her grandson hunt and wanted to be in the woods herself. She soon arrowed a 164 2/8 inch booner. Not only did it have antlers, it also weighed 239.4 lbs! I have a grandma that hunts and nothing makes me more excited than watching her shoot a deer. When my grandmas video of shooting a deer went viral last year our entire family was extremely excited. It is a wonderful thing to have a family that hunts together. I do not have her age at this time but follow rack junkies on Facebook for updates.

During an with interviewed by Micheal A. Sawyer.  Debi had this to say:

“I asked my husband (Marty) if he wanted to go hunting so we headed out. I wasn’t seeing anything,” she said.

“I usually don’t text when I’m hunting, but I sent him a text telling him if he wanted to go home I was ready to go.”

Elliott said she had removed her head net and gloves and was preparing to descend when she heard a noise.

“I looked and this buck came around a big tree to my right,” she said. “I knew it had nice antlers, but I learned not to look at them once I decide to shoot. It makes me too nervous.”

Elliott triggered the crossbow and took the 20 yard shot. She easily found her arrow covered with blood, but she could not find a blood trail in the direction the buck ran.

Elliott decided not to risk pushing a wounded buck and returned to her house.

Later that night, well after dark, her son, Jeremy Elliott, inquired about her luck in the woods and learned about the shot. After stopping by and seeing the arrow, he and his mother returned to the scene of the shot.

“Jeremy is a deputy game warden and has a really good light he uses so that helped,” Debi Elliott said. A lifelong hunter, she said she had taken her son hunting in a backpack when he was 9 months old.

It took a while, but Jeremy Elliott found one drop of blood, according to his mother.

“It was about the size of the end of my pinky finger,” she said. “We walked along and not long after that he handed me the light and told me where to shine it and there was the buck piled up.”

The behemoth buck had gone only about 50 yards, Debi Elliott said, but had fallen in very thick brush.

The official score will be out after the mandatory drying period.

By then, Debi Elliott said, she may finally be able to believe her amazing hunting accomplishment. 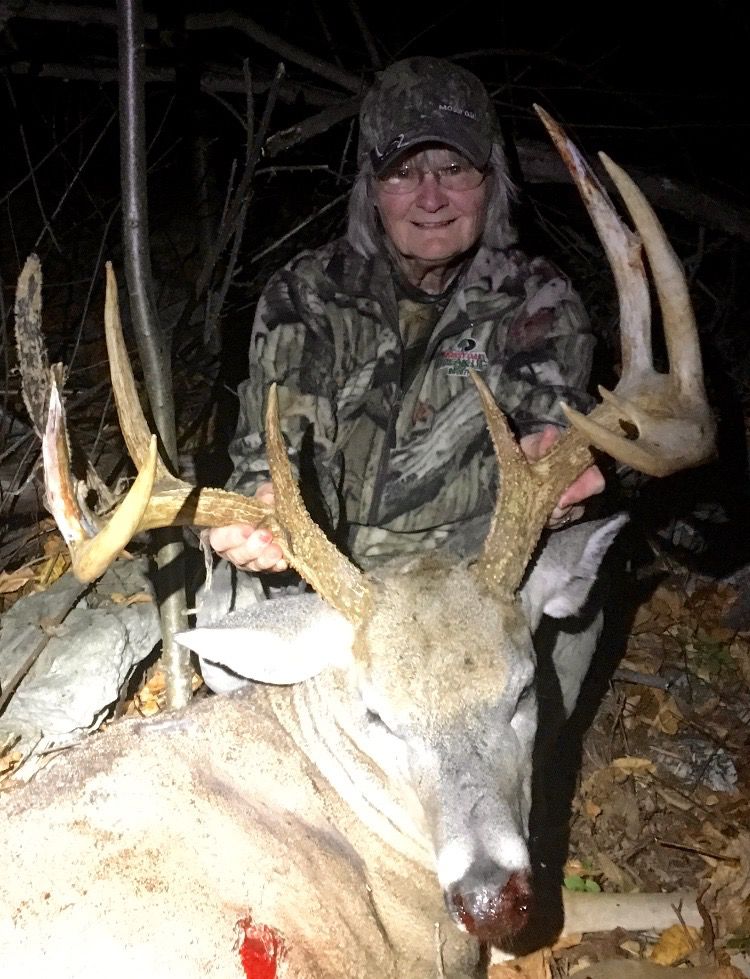